That’s what the world’s most prestigious and unique law enforcement foot race is all about.

Starting in Baker, California and ending in Las Vegas, Nevada, law enforcement officers from around the globe battle it out every Spring for the chance of winning the coveted cup trophy.​​​

The Baker to Vegas Challenge Cup Relay race covers 120 grueling miles, which is broken down into 20 stages through the desert and mountains between the cities of Baker, California and Las Vegas, Nevada. Teams start on Saturday afternoon, run throughout the night and finish on Sunday morning. Collective team finishing times can range from 13-20 hours.

If a team puts in the

work and is blessed

with a TOP 3 finish in

their respective division, they are called up onto the podium at the official B2V Awards Ceremony and presented with a prestigious plaque!

THE LARGEST POLICE ATHLETIC EVENT IN THE WORLD

So what is the prize

for all of this effort?

If you have trained

and finished in the top half of your division, the reward is a glass Baker to Vegas Challenge Cup Relay mug for each runner on the team. The mug is highly coveted among race participants and distinguishes the winner as being among the elite teams in their respective division. In addition to bragging rights for a year, the overall number placement of the team is the same number the team will wear on their uniforms and support vehicles for the following year. Your number immediately identifies how elite your team really is. 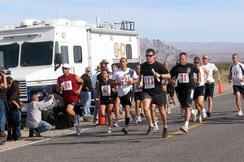 Interactive Course Map with GPS Coordinates for each stage

The race conditions are virtually unknown from one stage to another. The early runners may face temperatures reaching 120 degrees along Highway 127, while later in the evening runners may be faced with high winds, freezing temperatures, rain or snow. In 1987, the race had to be halted due to a blizzard that was impassable. The 20 stages, or legs of the race, vary from flat stretches in the desert heat to the infamous “billy-goat legs,” which climb in elevation to 5600 feet at the summit. The Baker to Vegas Challenge Cup Relay is a serious test of the runner’s endurance. Each year runners often push themselves to exhaustion and the need for medical treatment. To make the event more competitive, the race is broken down into several categories based on the number of officers on the competing department.

There is much more to the race than the 20 runners however. A great deal of training, preparation and logistics goes into planning the race. There are strict rules in place to ensure the safety of each participant and every team is required to supply support personnel for their runners. There is the need for follow and shuttle vans, race day coordinators, supplies and lodging. Additionally, the team could not survive without the generous support of the CSU community and sponsors. These organizations and individuals donate their time, money, or efforts to ensure our success. 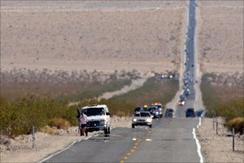 HISTORY OF THE B2V RACE

The Challenge Cup / Baker to Vegas Relay was the vision of Los Angeles Police Officers Chuck Foote and Larry Moore. It was spawned following the format laid by the LAPD Metro Division's "Death Valley Relay" which came to an abrupt end in 1985 after a seven—year stint of running through the Devil's graveyard.

Chuck Foote, General Manager of the Los Angeles Police Revolver and Athletic Club, Inc. (LAPRAAC) and Larry Moore, LAPD Athletic Director, drove the course and over those long stretches of highway came up with the name for the race and its basic format. The first stop was Baker, California, where a short but very welcome visit with the Baker High School principal secured a home for the starting line. It was followed by a whistle stop in Shoshone and a friendship of over 20 years was begun with Robbie Haines.  CLICK HERE TO READ MORE...