founded in 1998, The cSU police running team has become a tough competitor in the last decade.  we're moving up the ranks!

The Team was originally fielded by State C.R.U. (Critical Response Unit) members.  We have now grown to include ALL sworn CSU Police Officers as well as non sworn PD employees statewide. Over the

The CSU Police Running Team was founded almost 20 years ago by Jess Lopez (Fullerton) and Will Glen (Long Beach).  They had the vision to combine System wide South and North C.R.U. Platoons and on December 19th, 1997, the first CSU B2V steering committee met at CSUN.  A few weeks

later several of the members actually drove the B2V course for orientation.

participated in the B2V race for the first time. The first CSU System wide

B2V Team consisted of Runners and Volunteers from 11 campuses

Every March, we come together from all over California to compete as ONE.  The CSUPD B2V Running Team has become a formidable competitor in our Division and we're slowly working our way up the overall ranks to the Elites.

we are a Volunteer run organization

We are passionate about lifetime fitness and helping each other become better versions of ourselves. Staying physically and mentally fit isn't a choice, it's a necessity that requires work and running a lot of miles. It also requires a good pair of shoes!

Running in the heat of the desert, or in the middle of the night while coyotes track your every step, isn't necessarily fun for everyone, BUT winning is!  So is celebrating our achievements with CSU friends and colleagues at the Team Awards BBQ Banquet or up on the official B2V podium accepting our plaque and MUGS!  Good times!! 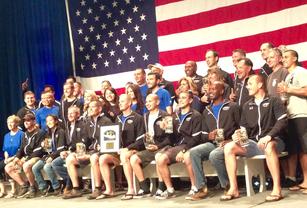